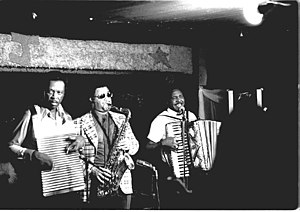 Who is C.J. Chenier?

C. J. Chenier born Clayton Joseph Thompson, September 28, 1957, Port Arthur, Texas, is the Creole son of the Grammy Award winning "King of Zydeco", Louisiana musician, Clifton Chenier. In 1987, Chenier followed in his father's footsteps, and led his father's band as an accordion performer and singer of Zydeco, a blend of Cajun and Creole music. With five previous albums to his credit, by 1994, Chenier began to record for Chicago-based Alligator Records.

Discuss this C.J. Chenier biography with the community: