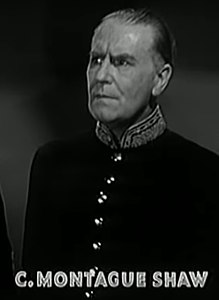 Who was C. Montague Shaw?

He began his acting career in the Australian theatre, before moving on to Britain and elsewhere in the British Empire. His first film role was in The Set-Up. He later found success in the film serial market, often playing professors and paternal supporting roles. His most known role came in 1936 as Professor Norton in the popular serial Undersea Kingdom, starred by Crash Corrigan.

Montague Shaw died in Woodland Hills, Los Angeles, California, at the age of 85.

Discuss this C. Montague Shaw biography with the community: