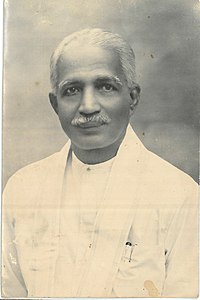 Christopher William Wijekoon Kannangara was a Sri Lankan lawyer and politician. Rising up the ranks of Sri Lanka's movement for independence in the early part of the 20th century, he became the first Minister of Education in the State Council of Ceylon, and was instrumental in introducing extensive reforms to the country's education system that opened up education to children from all levels of society.

Born in rural town in Balapitiya, South, Sri Lanka, his academic prowess enabled him to win a scholarship to Richmond College, Galle, a prestigious national school at the time. Initially working as a lawyer after leaving school, he entered politics as the movement for independence was gathering strength in Sri Lanka. Kannangara was first elected to the Ceylon Legislative Council in 1923 and then to the State Council. He also served as the President of the Ceylon National Congress.

As Minister of Education in the State Council, Kannangara introduced extensive reforms to the education system of Sri Lanka throughout the 1940s. They befitted thousands of underprivileged students in rural parts of the country by making education free for all students. He also began a central schools scheme, which established high quality secondary schools in rural areas of the country. Kannangara's significant achievements in areas of education have led him to being commonly referred to as the Father of Free Education in Sri Lanka.

Discuss this C. W. W. Kannangara biography with the community: