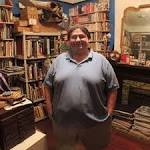 Who is Caesar Meadows?

He likes to reformat his comic strips as special-edition micro-comics which he then gives out to people during Mardi Gras. He also sells them in capsule vending machines in select locations around New Orleans.

Caesar used to operate Jigsaw Junction, an archive of comics, in Reserve, Louisiana.

Meadows's Mardi Gras alter ego is "The What".

Discuss this Caesar Meadows biography with the community: