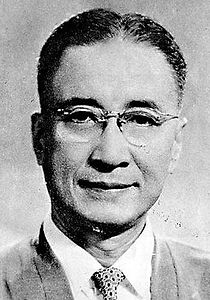 Who was Cai Chusheng?

Cai Chusheng was a Chinese film director of the pre-Communist era, and was the first Chinese director to win an international film award at the Moscow International Film Festival. Best known for his progressive output in the 1930s, Cai Chusheng was later severely persecuted and died during the Cultural Revolution. His remains are kept at the Babaoshan Revolutionary Cemetery in Beijing.

Discuss this Cai Chusheng biography with the community: