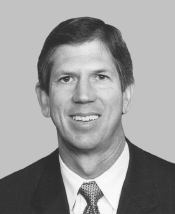 Who is Cal Dooley?

Calvin M. "Cal" Dooley, American politician, was a Democratic member of the United States House of Representatives from 1991 to 2005, representing the 17th and 20th districts of California.

Born in Visalia, California, he grew up on his parents' farm several miles east of Hanford and graduated from Hanford Union High School in 1972. Dooley earned his bachelor's degree in agricultural economics from the University of California, Davis in 1977 and a master's degree in Management from Stanford University in 1987. Dooley worked as a rancher and then as an administrative assistant for California State Senator Rose Ann Vuich from 1987 to 1990.

In mid-1990, Dooley won the Democratic primary for what was then the 17th District and faced six-term Republican Chip Pashayan in November. Although Pashayan had been reelected with 71 percent of the vote in 1988, he was bogged down by the House banking scandal, and Dooley defeated him by just over 9 points. In 1992, his district was renumbered as the 20th District and drawn as a Latino-majority district. He was easily reelected that year and five more times after that. He faced only one truly serious contest, when Republican Rich Rodriguez managed to hold him to 53 percent of the vote. A "New Democrat," his voting record was considered moderate, as is typical for Democrats from the Central Valley.

Discuss this Cal Dooley biography with the community: