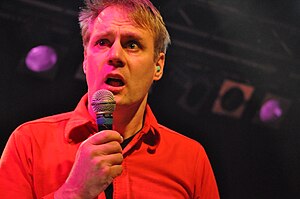 Who is Calvin Johnson?

Calvin Johnson is an American guitarist, vocalist, songwriter, music producer, and disc jockey born in Olympia, Washington, US. Known for his uniquely deep, droning singing voice, Johnson was a founding member of the bands Cool Rays, Beat Happening, The Go Team, Dub Narcotic Sound System, and The Halo Benders. Calvin Johnson is also the founder and owner of the influential indie label K Records, and has been cited as a major player in the beginning of the modern independent music movement. As a prominent figure in the Olympia music scene, he was one of the major organizers of the seminal International Pop Underground Convention.

Discuss this Calvin Johnson biography with the community: