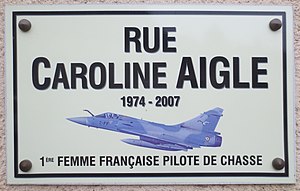 Who was Caroline Aigle?

Commandant Caroline Aigle was a French aviator who achieved a historical first when, at the age of 25, she became the first woman fighter pilot in the French Air Force. Her promising military career was cut short by death from cancer seven years later. She was posthumously awarded the Médaille de l'Aéronautique.

Discuss this Caroline Aigle biography with the community: