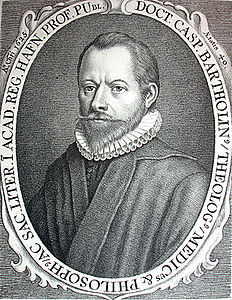 Who was Caspar Bartholin the Elder?

Caspar Bartholin the Elder was born at Malmø, Denmark and was a polymath, finally accepting a professorship in medicine at the University of Copenhagen, Denmark, in 1613. He later taught theology at the same university.

His precocity was extraordinary; at three years of age he was able to read, and in his thirteenth year he composed Greek and Latin orations and delivered them in public. When he was about eighteen he went to the University of Copenhagen and afterwards studied at Rostock and Wittenberg.

He then travelled through Germany, the Netherlands, England, France and Italy, and was received with marked respect at the different universities he visited. In 1613 he was chosen professor of medicine in the University of Copenhagen, and filled that office for eleven years, when, falling into a dangerous illness, he made a vow that if he should recover he would apply himself solely to the study of divinity. He fulfilled his vow by becoming professor of divinity at Copenhagen and canon of Roskilde. He died on the 13th of July 1629 at Sorø in Zealand.

His work, Anatomicae Institutiones Corporis Humani was for many years a standard textbook on the subject of anatomy. He was the first to describe the workings of the olfactory nerve.

Discuss this Caspar Bartholin the Elder biography with the community: