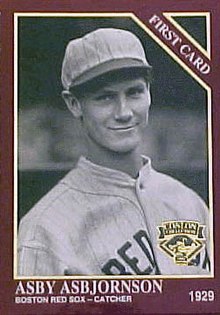 Who was Casper Asbjornson?

Robert Anthony Asbjornson was a catcher in Major League Baseball who played for the Boston Red Sox and Cincinnati Reds. Asbjornson batted and threw right-handed. He was born in Concord, Massachusetts.

Asbjornson was 19 years old when he debuted with the Boston Red Sox in 1928, being one of seven catchers used by the Red Sox in an unsuccessful attempt to replace retired Grover Hartley. Later, he saw more action with the Cincinnati Reds as a backup for Clyde Sukeforth and Ernie Lombardi in part of two seasons. His best year was 1931, when he posted career-highs in batting average, runs batted in and games played.

Asbjornson died in Williamsport, Pennsylvania, at the age of 60.

Discuss this Casper Asbjornson biography with the community: