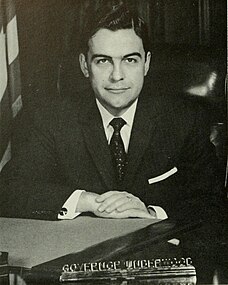 Who was Cecil H. Underwood?

Cecil Harland Underwood was an American Republican Party politician from West Virginia, known for the length of his career. He was the 25th and 32nd Governor of West Virginia from 1957 until 1961 and from 1997 until 2001. He ran for reelection in 2000 but was defeated by Bob Wise. Underwood was both the youngest and the oldest person ever to serve as Governor of West Virginia. He was also the first guest on the television game show To Tell the Truth. He was a Methodist, and a former minister.

Discuss this Cecil H. Underwood biography with the community: