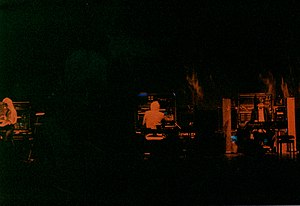 Who is Christopher Franke?

Christopher Franke is a German musician and composer. From 1971 to 1987 he was a member of the electronic group Tangerine Dream. Initially a drummer with The Agitation, later renamed Agitation Free, his primary focus eventually shifted to keyboards and synthesizers as the group moved away from its psychedelic rock origins. While he was not the first musician to use an analog sequencer, he was probably the first to turn it into a live performance instrument, thus laying the rhythmic foundation for classic Tangerine Dream pieces and indeed for the whole Berlin school sound.

After his departure from the group, he founded the Sonic Images record label, a New Age music label called Earthtone and the Berlin Symphonic Film Orchestra, and produced a number of solo music works. After leaving Tangerine Dream, his only live concert was on Oct 9, 1991 at the Astoria Theatre in London. He performed on stage with Edgar Rothermich who is also his producer and engineer on all his solo projects and film music after 1990.

Christopher Franke moved to Los Angeles, California in 1991 to pursue film work. In 1995 he scored the AFI short, Requiem. He may be best known for composing the music for the science fiction television series Babylon 5, as well as the score of the anime movie Tenchi Muyo! in Love and in 2005 the music for German musical Ludwig².

Discuss this Christopher Franke biography with the community: