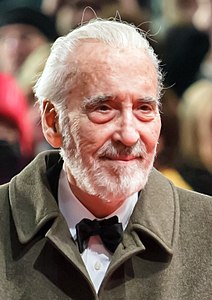 Who is Christopher Lee?

Sir Christopher Frank Carandini Lee, CBE, CStJ, is an English actor and singer. Lee initially portrayed villains and became best known for his role as Count Dracula in a string of popular Hammer Horror films. His other notable roles include Francisco Scaramanga in the James Bond film The Man with the Golden Gun, Saruman in The Lord of the Rings film trilogy and The Hobbit film trilogy, and Count Dooku in the final two films of the Star Wars prequel trilogy.

Always noted as an actor for his deep, strong voice, he has, more recently, also been known for using his singing ability, recording various opera and musical pieces between 1986 and 1998 and the symphonic metal album Charlemagne: By the Sword and the Cross in 2010 after having worked with several metal bands since 2005. The heavy metal follow-up titled Charlemagne: The Omens of Death was released on 27 May 2013. He was honoured with the "Spirit of Metal" award in the 2010 Metal Hammer Golden God awards ceremony.

Discuss this Christopher Lee biography with the community: