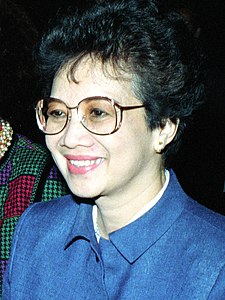 Who was Corazon Aquino?

María Corazón Sumulong "Cory" Cojuangco Aquino was a Filipina politician who served as the 11th President of the Philippines, the first woman to hold that office, and the first female president in Asia. Regarded as the "Icon of Philippine Democracy", Aquino was the most prominent figure of the 1986 People Power Revolution, which toppled the 21-year authoritarian rule of President Ferdinand Marcos and restored democracy to the Philippines. She was named Time magazine's "Woman of the Year" in 1986. She is the first President without any political experience as she had not held any other elective office.

A self-proclaimed "plain housewife", she was married to Senator Benigno Aquino, Jr., the staunchest critic of President Marcos. She emerged as leader of the opposition after her husband was assassinated on August 21, 1983 upon returning to the Philippines from exile in the United States. In late 1985, Marcos called for snap elections, and Aquino ran for president with former senator Salvador Laurel as her Vice-President. After the elections were held on February 7, 1986, the Batasang Pambansa proclaimed Marcos and his running mate, Arturo Tolentino, as the winners amidst allegations of electoral fraud, with Aquino calling for massive civil disobedience actions. Defections from the Armed Forces and the support of the local Catholic Church led to the People Power Revolution that ousted Marcos and secured Aquino's accession on February 25, 1986.

Discuss this Corazon Aquino biography with the community: