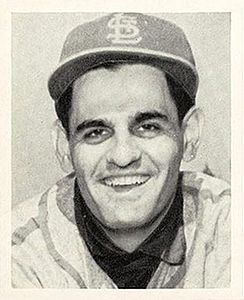 Who was Creepy Crespi?

Frank Angelo Joseph "Creepy" Crespi, was a Major League Baseball player who played infielder from 1938-1942 for the St. Louis Cardinals. He made his major league debut on 14 September 1938 playing second base for the Cardinals.

In 1951, longtime Cardinals star shortstop Marty Marion praised Crespi as the best defensive second baseman he'd ever played with. "For one year—1941—Crespi was the best second baseman I ever saw. He did everything, and sensationally." Marion added, however, that Crespi's play dropped off in 1942, and after that he was drafted.

Discuss this Creepy Crespi biography with the community: