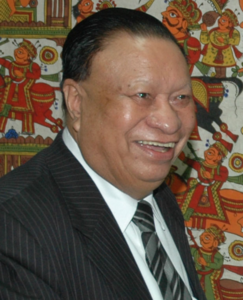 Dr. Donwa Dethwelson Lapang, popularly known as Dr. D. D. Lapang, is a politician from Meghalaya, India, and the ex-chief minister of Meghalaya.

He started his life as a road labourer and worked his way up become Sub-Inspector of schools. His father's name was Donwa War. In 1958, he married Amethyst Lynda Jomes Blah.

In 1972 he became MLA from Nongpoh as an independent candidate. And later in 1992 to February, 1993 he was the state Chief Minister. On 4 March 2003 he was again sworn in as Chief Minister. He resigned from the position on 15 June 2006 due to dissidence in the coalition government.

He took office as Chief Minister again in March 2007. His party, the Indian National Congress, won a plurality of seats in the March 2008 state legislative election, and Lapang was sworn in as Chief Minister on March 10, 2008, but with the support of only 28 members of the 60 seat legislature, he resigned on March 19.

He became chief minister for a fourth time on May 13, 2009, after the state was under President's Rule for 2 months.

Discuss this D. D. Lapang biography with the community: