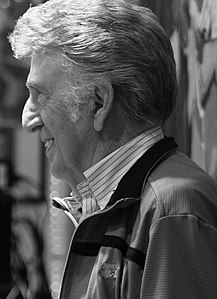 Dominic Joseph Fontana, is an American musician best known as the drummer for Elvis Presley for 14 years. He played on over 460 RCA cuts with Elvis.

Nicknamed "D. J.", he was employed by the Louisiana Hayride to be an in-house drummer on its Saturday night radio broadcast. In October 1954 he was hired to play drums for Presley, and that marked the beginning of a fifteen-year relationship. He performed on the NBC television special known as the '68 Comeback Special.

Fontana, joined a band consisting of Scotty Moore, Bill Black and Elvis Presley, calling themselves "The Blue Moon Boys". The band became the band that would perform and record the vast majority of the Elvis Presley hits of the 50's including "Heartbreak Hotel", "Hound Dog", "Don't Be Cruel", and "Jailhouse Rock". The band also toured extensively and performed on several television appearances including The Ed Sullivan Show through 1956 and 1957.

I learned the value of simplicity at the Hayride. I heard Scotty and Bill and Elvis one night and knew that I couldn't mess up that sound. That's why I always play what I feel. If that won't work, I just won't do it again. I think the simple approach comes from my hearing so much big band music. I mixed it with rockabilly.

Discuss this D. J. Fontana biography with the community: