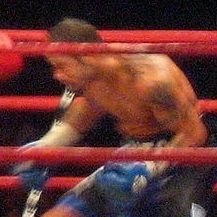 Who is Daniel Santos?

Daniel Santos is a Puerto Rican professional boxer. As an amateur Santos represented Puerto Rico in international events, including the 1990 and 1992 Junior World Championships, Pan American Boxing Tournament, Goodwill Games, 1995 Pan American Games and the 1996 Summer Olympics, where he won a bronze medal in the Welterweight Division. Santos debuted as a professional in 1996. Santos won the World Boxing Organization Welterweight championship on June 5, 2000. On March 16, 2002 he vacated the welterweight division's championship in order to compete against Yori Boy Campas for the vacant World Boxing Organization Light middleweight championship. Santos defended this championship on four occasions, against Mehrdud Takaloo, Fulgencio Zúñiga, Michael Lerma and Antonio Margarito before losing it to Sergiy Dzindziruk by unanimous decision in a fight that took place on December 3, 2005. On July 11, 2008, Santos won his third professional championship, knocking out Joachim Alcine in six rounds to win the World Boxing Association's light middleweight title.

Discuss this Daniel Santos biography with the community: