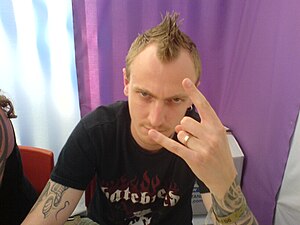 Who is Daniel Svensson?

Daniel Svensson is the current drummer and youngest member of the Swedish band In Flames, and drummer / vocalist for the band Sacrilege GBG. He was also in Diabolique before he joined In Flames in 1998 to fill the position created when Björn Gelotte moved from drums to guitars. In Flames' first album with him as drummer along with Peter Iwers was Colony, and it was released the following year. He rejoined Sacrilege GBG in 2006. He is also a supporter of the Swedish football team IFK Göteborg.

Discuss this Daniel Svensson biography with the community: