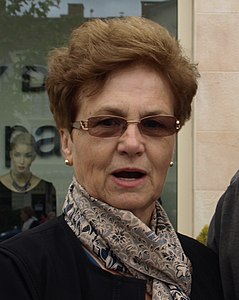 Person Or Being In Fiction

Who is Danuta Wałęsa?

Mirosława Danuta Wałęsa, maiden surname Gołoś, is the wife of the former President of Poland Lech Wałęsa. In 1983 she accepted the Nobel Peace Prize in Oslo, Norway on behalf of her husband, who feared, at a time of great political upheaval in the country, that the Polish government might not allow him to return if he travelled to Oslo himself. Lech and Danuta have been married since November 8, 1969 and have eight children:

Danuta grew up in Krypy village near Węgrów. She was working in a flower shop near the Lenin Shipyard in Gdańsk when she met Lech Wałęsa, then an electrician. After they married, she began using her middle name more than her first name, per Lech's request. She was even more resolutely anti-Communist than her husband. During her husband's frequent interrogations by the SB in the 1980s, she was known to openly taunt officers who came to pick him up.

Discuss this Danuta Wałęsa biography with the community: