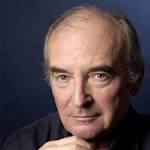 Who is David Ambrose?

David Ambrose is a British novelist and screenwriter whose credits include at least 20 Hollywood films, 3 stage plays, and countless hours of television, including the controversial Alternative 3. He was born in Chorley, England and attended Blackburn Grammar School and Merton College, Oxford. He is married to artist Laurence Ambrose and lives in Switzerland.

His screenplay for The Survivor won the Best Script award at the International Film Festival of Catalonia.

Discuss this David Ambrose biography with the community: