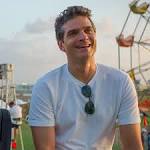 Who is David Levien?

David Levien is an American screenwriter, novelist, director, and producer. Best known as the co-writer of Ocean's Thirteen, and Rounders Levien has also produced films such as The Illusionist and The Lucky Ones. Levien frequently collaborates on projects with his writing partner Brian Koppelman.

As a novelist, he has published City of the Sun, Where the Dead Lay, and 13 Million Dollar Pop. Earlier works are often published under D.J. Levien.

Levien studied at the University of Michigan.

Discuss this David Levien biography with the community: