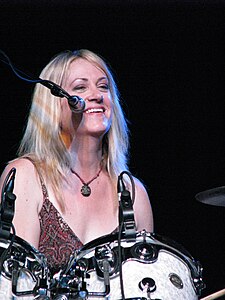 Who is Debbi Peterson?

Deborah Mary "Debbi" Peterson, is an American musician and the drummer of the all-girl group, The Bangles. She sang lead vocals on two of the band's released singles, "Going Down to Liverpool" and "Be With You". She is the younger sister of Vicki Peterson.

She had already established her first band in high school, and started a solo career after the separation of The Bangles in 1990. In 1992, she formed the short-lived duo Kindred Spirit with Siobhan Maher, formerly of River City People.

Peterson has been married to English sound engineer Steven Botting since 1989. They have two children.

Discuss this Debbi Peterson biography with the community: