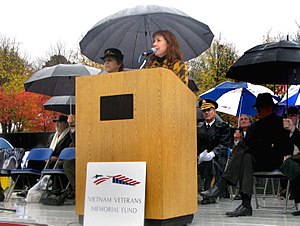 Who is Diane Carlson Evans?

Carlson Evans was born and raised on a dairy farm in rural Minnesota and graduated from nursing school in Minneapolis, Minnesota. Upon graduation, she joined the Army Nurse Corps and served in Vietnam, at age 21, in 1968-1969. She served in the burn unit of the 36th Evacuation Hospital in Vung Tau and at Pleiku in the 71st Evacuation Hospital, 30 miles from the Cambodian border in the Central Highlands, just 10 to 20 minutes by helicopter from the field. Including her one year in Vietnam, Carlson Evans completed a total of 6 years in the Army Nurse Corps.

Discuss this Diane Carlson Evans biography with the community: