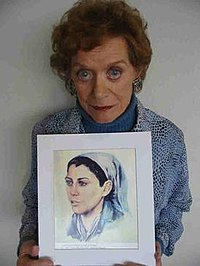 Who was Dina Babbitt?

Dina Babbitt was an artist and Holocaust survivor. A U.S. citizen, she resided in Santa Cruz, California.

As Dina Gottliebova, she was imprisoned in the Auschwitz Concentration Camp during WWII, where she drew portraits of Romani inmates for the infamous Dr. Mengele. Following the liberation of the camp and the end of the war she emigrated to the United States and became an animator. She had been fighting the Auschwitz-Birkenau State Museum for the return of her paintings.

She was featured alongside fellow concentration camp survivors and artists Jan Komski and Felix Nussbaum in the 1999 documentary film Eyewitness, which was nominated for an Academy Award for Documentary Short Subject.

Discuss this Dina Babbitt biography with the community: