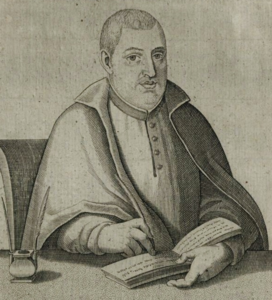 Who was Diego Andrada de Payva?

Diego Andrada de Payva was a celebrated Portuguese theologian of the sixteenth century.

He was born at Coimbra, the son of the grand treasurer of João III. His original bent was towards foreign mission. After finishing his course at the University of Coimbra, he was ordained to the priesthood, and remained as professor of theology.

So great was his reputation that King Sebastian of Portugal appointed him theologian at the Council of Trent, 1561. Here he merited the special thanks of the Pope by an able work in defense of the papal authority. While at the council he wrote his "Decem libri orthodoxarum explicationum" against the work of Martin Chemnitz, "Theologiae Jesuitarum praecipua capita". In this book he discusses and defines the chief points of doctrine attacked by the heretics. Chemnitz answered by his well-known "Examen Conc. Trid.", in reply to which Andrada produced his best work, "Defensio Tridentinae fidei Cath.".

Between 1562 and 1567, Diogo de Paiva de Andrada published many controversial tracts, especially against the Lutheran, Martin Chemnitz. His first tract, De Societatis Jesu Origine, led to his being erroneously presumed a Jesuit.

Discuss this Diego Andrada de Payva biography with the community: