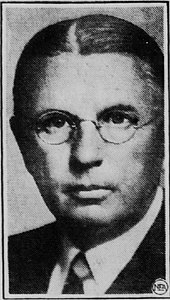 Who was E. Harold Cluett?

Ernest Harold Cluett was a United States Representative from New York. Born in Troy, he attended the public schools and was graduated from The Albany Academy in Albany, New York, in 1892 and from Williams College, where he was a member of St. Anthony Hall, in 1896; he also studied at Oxford University in England. He was treasurer of Cluett, Peabody & Co. from 1900 to 1916, vice president from 1916 to 1929, and chairman of the board of directors from 1929 to 1937. He was head of the employment division of the Watervliet Government Arsenal in 1918 and served on a special mission to France for the Y.M.C.A. in 1918. He was a member of the National War Work Council, and was an unsuccessful candidate for election to the United States Senate in 1934.

Cluett was elected as a Republican to the 75th, 76th and 77th United States Congresses, holding office from January 3, 1937, to January 3, 1943. He was not a candidate for renomination in 1942 and retired from public life, residing in Palm Beach, Florida and Troy. He died in Troy in 1954; interment was in Oakwood Cemetery.

Discuss this E. Harold Cluett biography with the community: