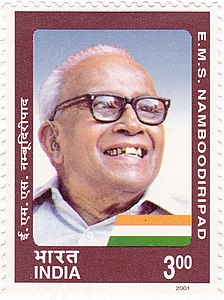 Who was E. M. S. Namboodiripad?

Elamkulam Manakkal Sankaran Namboodiripad pioneered radical land and educational reforms in Kerala state that are today being duplicated by other states of India. It is largely due to his commitment and guidance that the Communist Party of India, of which he was Politburo member and general secretary for 14 years, has become such a domineering political force, playing a vital role in India's new era of coalition politics.

Discuss this E. M. S. Namboodiripad biography with the community: