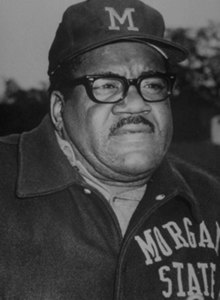 Who was Earl Banks?

Earl C. Banks was an American football player, coach, and college athletics administrator. He served as the head coach at Morgan State College, now Morgan State University, from 1960 to 1973, compiling a record of 96–31–2, and as the athletic director at the school from 1970 to 1983. Banks was inducted into the College Football Hall of Fame as a coach in 1992. He died at age 69 as a result of a car crash in Baltimore, Maryland.

Discuss this Earl Banks biography with the community: