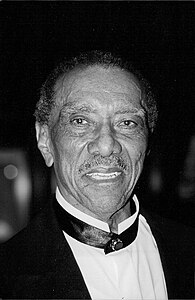 Who was Earl Palmer?

Earl Cyril Palmer was an American rock & roll and rhythm and blues drummer, and member of the Rock and Roll Hall of Fame.

Palmer played on many recording sessions, including Little Richard's first several albums and Tom Waits' 1978 album Blue Valentine. According to one obituary, "his list of credits read like a Who's Who of American popular music of the last 60 years".

Discuss this Earl Palmer biography with the community: