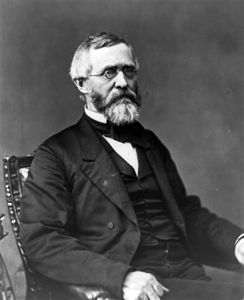 Who was Ebenezer R. Hoar?

Ebenezer Rockwood Hoar was an influential American politician, lawyer, and justice from Massachusetts. He was appointed U.S. Attorney General in 1869 by President Ulysses S. Grant; he became the first U.S. Attorney General to head the newly created Department of Justice in July, 1870. As Attorney General Hoar worked with President Ulysses S. Grant and Secretary of State Hamilton Fish over contentious issues as settling the Alabama Claims with England and in keeping the U.S. from recognizing Cuban belligerency during the Ten Years War. Hoar assisted Grant in appointing two Supreme Court justices that helped overturn a decision outlawing paper money as legal tender. Hoar himself, nominated by President Grant, was rejected by the Senate to fill a Supreme Court vacancy, in part due to Senators' dismay over Hoar's resistance to distribute federal patronage jobs without regard to the job applicant's cababilities.

Hoar's position on Grant's Cabinet was tenuous, since two Cabinet members, Secretary of the Treasury, George S. Boutwell and Hoar, were from Massachusetts, during an era when regionally-balanced cabinets were an expected norm by members of the U.S. Senate. In June 1870 Hoar was asked to resign by President Grant; Hoar's unexpected resignation became controversial when his resignation letter to Grant was printed by news journals. Hoar departed from office in November 1870, upon the confirmation of Amos T. Akerman from Georgia.

Discuss this Ebenezer R. Hoar biography with the community: