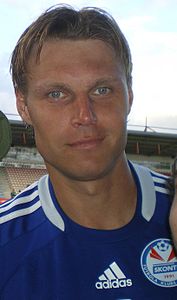 Who is Edgaras Jankauskas?

A powerful striker who excelled in the physical side of the game, he was also relatively skilled. Other than in his own he played professionally in nine different countries, and represented the Lithuanian national team for almost 20 years.

Whilst with Porto Jankauskas made history as the first Lithuanian footballer to win the UEFA Champions League, in 2004.

Discuss this Edgaras Jankauskas biography with the community: