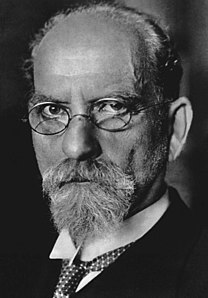 Who was Edmund Husserl?

Edmund Gustav Albrecht Husserl was a German philosopher who established the school of phenomenology. He broke with the positivist orientation of the science and philosophy of his day. He elaborated critiques of historicism and of psychologism in logic. Not limited to empiricism, but believing that experience is the source of all knowledge, he worked on a method of phenomenological reduction by which a subject may come to know directly an essence.

Although born into a Jewish family, Husserl was baptized as a Lutheran in 1886. He studied mathematics under Karl Weierstrass and Leo Königsberger, and philosophy under Franz Brentano and Carl Stumpf. Husserl himself taught philosophy as a Privatdozent at Halle from 1887, then as professor, first at Göttingen from 1901, then at Freiburg from 1916 until he retired in 1928. Thereafter he gave two notable lectures: at Paris in 1929, and at Prague in 1935. The notorious 1933 race laws of the Nazi regime took away his academic standing and privileges. Following an illness, he died at Freiburg in 1938.

Discuss this Edmund Husserl biography with the community: