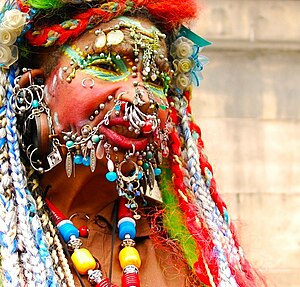 Who is Elaine Davidson?

Elaine Davidson is the "Most Pierced Woman" according to the Guinness World Records.

She was born in Brazil and is a former nurse. She does not drink or use drugs. She now resides in Edinburgh, Scotland. On June 8, 2011, Davidson married Douglas Watson, a man with no piercings. At the time of her wedding, news reports claimed her total number of piercings was 6,925. The couple continue to reside in Edinburgh where Davidson runs an aromatherapy shop.

Discuss this Elaine Davidson biography with the community: