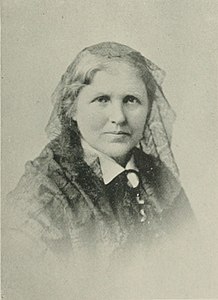 Who was Eliza Allen Starr?

Eliza Allen Starr was an American artist, art critic, teacher, and lecturer. She was known throughout the United States and Europe for her books about Catholic art. Born in Massachusetts, Starr moved to Chicago in 1856, where she taught art and began to lecture throughout the city and around the United States. A convert from Unitarianism to Catholicism, in 1885 she became the first woman to be awarded the Laetare Medal, the most prestigious honour given to American Catholics. Pope Leo XIII sent her a medallion after she wrote The Three Archangels and the Guardian Angels in Art. Starr was also awarded a medal for her work as an art educator, based on displays of her students' work at the World's Columbian Exposition. She was the aunt of and a large influence on Ellen Gates Starr.

Discuss this Eliza Allen Starr biography with the community: