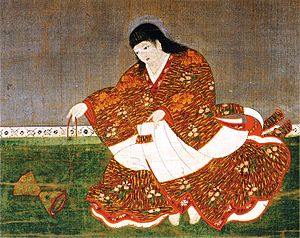 Emperor Antoku was the 81st emperor of Japan, according to the traditional order of succession. His reign spanned the years from 1180 through 1185. During this time, the imperial family was involved in a bitter struggle between warring clans. Yoritomo, with his cousin Yoshinaka, led a force from the Minamoto clan against the Taira, who controlled the emperor. During the sea battle of Dan-no-ura in April 1185, a member of the royal household took Antoku and plunged with him into the water in the Shimonoseki Straits, drowning the child emperor rather than allowing him to be captured by the opposing forces. The conflict between the clans led to numerous legends and tales. Antoku's tomb is said to be located in a number of places around western Japan, including the island of Iwo Jima, a result of the spreading of legends about the emperor and the battle.

Discuss this Emperor Antoku biography with the community: