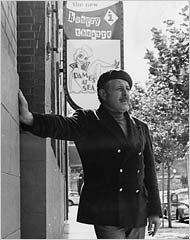 Who was Enrico Banducci?

Enrico Banducci, born Harry Banducci, was an American impresario. Banducci operated the hungry i nightclub in San Francisco's North Beach neighborhood, where he launched the careers of Lenny Bruce, Mort Sahl, Bill Cosby, Jonathan Winters, and Barbra Streisand, and featured Woody Allen and Dick Cavett before they were well-known, as well as countless folk singers. The hungry i featured the original brick wall in the stage background, a staple for stand up comedy presentations ever since. Banducci bought the hungry i from its founder, Eric "Big Daddy" Nord, in 1950. Banducci later also started the Clown Alley hamburger stand as well as Enrico's Sidewalk Cafe on Broadway, a restaurant and jazz club that has been in and out of business.

Banducci was born in 1922 in Bakersfield, California. He came to San Francisco at age 13 to study under the concertmaster of the San Francisco Symphony. He changed his first name to "Enrico" after Enrico Caruso. He was married five times, the first to Raimonde Verney, daughter of a symphony violinist. He wore a beret, beginning after a health inspector insisted he wear a hair covering while he was running a food operation and continuing to cover his eventual baldness. He bought the hungry i for $800 in borrowed money in 1948. Although he once calculated that he made over $10 million from his various projects, he spent it all on his lavish lifestyle. He spent time in jail, and was involved in a number of brawls. The hungry i went bankrupt at least once.

Discuss this Enrico Banducci biography with the community: