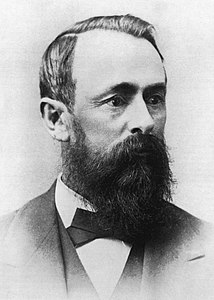 Who was Ephraim Shay?

He was born on July 17, 1839, in Sherman Township, Huron County, Ohio. His parents were James and Phoebe Shay.

In 1861, he moved to Muir, Michigan, and shortly after enlisted in Company D, 8th Missouri Volunteer Infantry. From his American Civil War Diary, Ephraim wrote "Received marching orders. Quite a coincidence; on the day I am 22 years old I start on my first expedition to defend my country's honor and flag." Ephraim served in the Western Theatre of the war, under General William Tecumseh Sherman. He was honorably discharged in 1864, returned to Ohio and married Jane Henderson on July 26 of that year.

He and his wife then moved to Ionia County, Michigan, to be near family members in Portland, Lyons, Muir, and Sebewa. In 1870 they moved to Sunfield, Michigan, where Ephraim operated a steam Sawmill. There, they had their son, Lette, on January 26, 1870.

After 1873, they moved to Haring, Michigan, where Shay established a general store and sawmill. In 1876 or 1877, Ephraim had an idea to use a locomotive to haul logs. With maple strips on pine rails, the origins of the Shay locomotive were put to use. Ephraim started working with Lima Machine Works in Lima, Ohio, and in 1880, the first Shay Locomotive was shipped to a customer in Grand Rapids, Michigan. In 1881, Shay started filing patents. Lima built 4 Shay locomotives in 1881, and 37 Shays in 1883. In 1884, Lima had a 34 page catalog, with five models of Shay Locomotives. By the late 1890s, Shay Locomotives were shipped around the world.

Discuss this Ephraim Shay biography with the community: