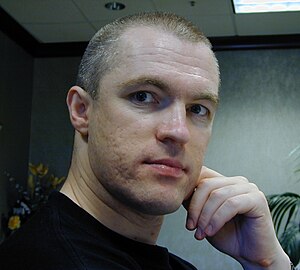 Erik Naggum was a Norwegian computer programmer recognized for his work in the fields of SGML, Emacs and Lisp. Since the early 1990s he was also a provocative participant on various Usenet discussion groups.

Naggum made significant contributions to RFC 1123, which defines and discusses the requirements for Internet host software, and RFC 2049, which defines electronic information transfer of various binary formats through e-mail.

In a 1999 newspaper article in Dagbladet, he was interviewed about his aggressive, confrontational participation in Usenet discussion groups. Erik later stated his motto to be: "Some people are little more than herd animals, flocking together whenever the world becomes uncomfortable … I am not one of those people. If I had a motto, it would probably be Herd thither, me hither."

His premature death was caused by a massive bleeding ulcer, related to ulcerative colitis, which he was diagnosed with about 15 years before his death.

Discuss this Erik Naggum biography with the community: