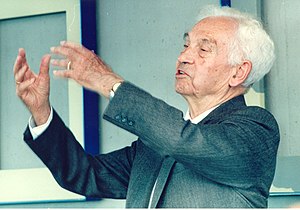 Who was Ernst Mayr?

Ernst Walter Mayr was one of the 20th century's leading evolutionary biologists. He was also a renowned taxonomist, tropical explorer, ornithologist, and historian of science. His work contributed to the conceptual revolution that led to the modern evolutionary synthesis of Mendelian genetics, systematics, and Darwinian evolution, and to the development of the biological species concept.

Although Charles Darwin and others posited that multiple species could evolve from a single common ancestor, the mechanism by which this occurred was not understood, creating the species problem. Ernst Mayr approached the problem with a new definition for species. In his book Systematics and the Origin of Species he wrote that a species is not just a group of morphologically similar individuals, but a group that can breed only among themselves, excluding all others. When populations within a species become isolated by geography, feeding strategy, mate selection, or other means, they may start to differ from other populations through genetic drift and natural selection, and over time may evolve into new species.

Discuss this Ernst Mayr biography with the community: