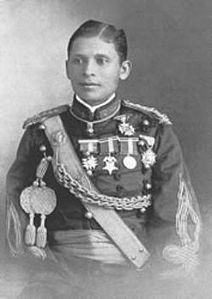 Who was Esteban Huertas?

He was born in Boyacá, Colombia. When he was 8 years old he ran away from home to join the army. Fighting in the civil war, he won many medals. In 1900 he lost his left arm when he fired a cannon. It was replaced by a wooden prosthesis. In 1902 he was promoted to the rank of general. Manuel Amador Guerrero managed to get Huertas on his side by spreading rumours that he would lose his title and be sent to the dangerous inlands of Colombia. In 1903 he took part in the revolution that led Panama to independence. On October 28, 1904 Huertas demanded two ministers from Amador's conservative cabinet resign. Fearing a coup, Amador disbanded the army and Huertas had to resign. Huertas died in Panama City in 1943.

Discuss this Esteban Huertas biography with the community: