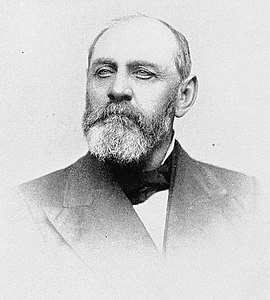 Who was Experience Estabrook?

Experience Estabrook was an American attorney and legal administrator active in territorial Wisconsin and Nebraska.

Born in Lebanon, New Hampshire, he moved with his parents to Clarence, New York, in 1822 where he attended the public schools. Estabrook then attended Dickinson College, in Carlisle, Pennsylvania. Estabrook graduated from the Chambersburg, Pennsylvania Law School, and then was admitted to the bar in Brooklyn, New York in 1839. He worked as a clerk at the Navy Yard in Brooklyn and later practiced law in Buffalo, New York. In 1840, he moved to Geneva, Wisconsin in 1840 and continued the practice of law. Estabrook was a delegate to the second Wisconsin State Constitutional Convention in 1848; in 1851, he became a member of the Wisconsin State Assembly. He was Attorney General of Wisconsin in 1852 and 1853.

Estabrook was appointed by President Franklin Pierce the attorney general of the Territory of Nebraska and served from 1855 to 1859. He presented credentials as a Delegate-elect to the Thirty-sixth United States Congress and served from March 4, 1859, to May 18, 1860, when he was succeeded by Samuel G. Daily, who contested his election. Experience Estabrook was appointed by the Governor to codify the Nebraska State laws in 1866.

Discuss this Experience Estabrook biography with the community: