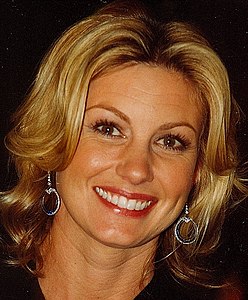 Who is Faith Hill?

Faith Hill is an American country pop singer and occasional actress. Her voice type is a mezzo-soprano. Hill has sold more than 40 million records worldwide.

Hill's first two albums, Take Me as I Am and It Matters to Me, established her as a popular country singer. The pair placed a combined three No. 1's on Billboard's country charts and each received multi-platinum certifications in the U.S. But the release of her next two albums, Faith and Breathe, brought Hill mainstream, crossover and international success, by achieving high positions and huge sales globally. Faith spawned her first international hit, "This Kiss", and went multi-platinum in various countries. Breathe became her best-selling album to date and one of the best-selling country albums of all time, by being buoyed by the huge crossover success of her best known single, "Breathe". It went multi-platinum in several countries around the world and earned Hill three Grammy Awards, including Best Country Album. In 2001, she recorded "There You'll Be" for the soundtrack of the movie Pearl Harbor and the song became an international success and her best-selling single in Europe. Hill's next two albums, Cry and Fireflies, kept her mainstream popularity. The former went multi-platinum and spawned another crossover single, "Cry", which won Hill a Grammy Award. The latter went multi-platinum as well, bolstered by the success of the singles "Mississippi Girl" and "Like We Never Loved at All", which earned her another Grammy Award.

Discuss this Faith Hill biography with the community: