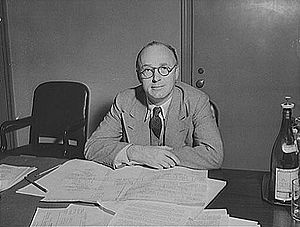 Who was Floyd Odlum?

Floyd Bostwick Odlum was a wealthy lawyer and industrialist. He has been described as "possibly the only man in the United States who made a great fortune out of the Depression". After struggling as a corporate attorney in Salt Lake City, Odlum received an offer to a law clerk at a New York firm, and in 1921 became Vice-President of his primary client, Electric Bond and Share Company. In 1923, Odlum, a friend, and their wives pooled a total of $39,600 and formed the United States Company to speculate in purchases of utilities and general securities. Within two years, the company's net assets had increased 17 fold to nearly $700,000. In 1928, Odlum incorporated Atlas Utilities Company to take over the common stock of his other company.

During the summer of 1929, Odlum was one of the few industrial moguls to believe that the boom on Wall Street could not continue much longer, and he sold one half of Atlas's holdings, as well as nine million dollars in new securities to investors. He had 14 million dollars in cash and short term notes when the stock market crashed. During the next few years, Atlas Utilities bought up stock in less fortunate investment companies at a Depression-reduced price. After Franklin D. Roosevelt was inaugurated President of the United States, Odlum shifted gears, selling off utilities before stronger regulation set in, and switching to large scale financing. By 1933, Odlum was one of the 10 wealthiest men in the United States. Besides Atlas Corporation, he had a major stake in RKO Studios, Convair, Northeast Airlines, and Bonwit Teller, among other businesses, and was associated in aviation business with the well-known financier George Newell Armsby. His association with Armsby provided a link to the Armsby's and Cowdin's enterprise Transcontinental Air Transport, Inc.

Discuss this Floyd Odlum biography with the community: