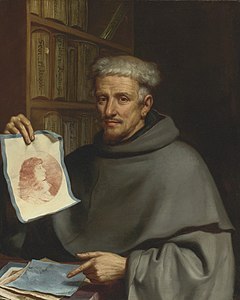 Who was Fra Bonaventura Bisi?

Fra' Bonaventura Bisi was an Italian painter of the Baroque period. He was also called Il Pittorino or Padre Pittorini, as a Franciscan monk in the convent of S. Francesco in Bologna. He was a pupil of Lucio Massari, and made miniature copies from the works of Correggio, Titian, and Guido Reni among others, which were collected in the cabinet of his patron, Alfonso IV of Modena. He also etched a few plates after Parmigianino, Reni, and an original Holy Family, with St. John and St. Elisabeth,. He died at Bologna.

Discuss this Fra Bonaventura Bisi biography with the community: