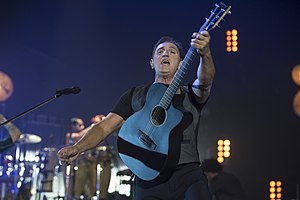 Who is Franco De Vita?

Franco De Vita is a singer-songwriter. His first album as a solo artist garnered three Spanish-language hits in Venezuela. He signed with the CBS Records label in 1989, and in 1990, his album Extranjero had a song that reached No. 1 on the U.S. Latin charts and won an MTV Video Music Award. His 2004 album Stop reached the Top 10 throughout Latin America and on the U.S. Latin charts.

Discuss this Franco De Vita biography with the community: