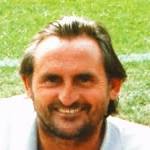 Who is Frank Lampard, Sr.?

Frank Richard George Lampard is an English former footballer. He played most of his career for West Ham United with a brief spell with Southend United. He was capped twice for England and is the father of Frank Lampard.

Lampard was born in East Ham, Essex to Frank Richard Lampard and Hilda D. Stiles. He has a sister Gwendoline, who is a year younger than him. He was only five years old when his father died in 1953, aged 33.

Discuss this Frank Lampard, Sr. biography with the community: