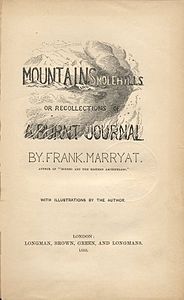 Who was Frank Marryat?

Frank Marryat was a sailor, artist, and author. He was one of the sons of Captain Frederick Marryat.

He joined the Royal Navy at 14 years old as midshipman and made a number of drawings during his service on HMS Samarang in the Far East in 1843. He planned to publish these without any accompanying text, but then added text from his own, and colleagues' journals to produce his first book in 1848.

In 1850, he left England for California via Panama with a manservant and three hunting dogs. This provided the material for another book, published in New York in 1855, "a sportsman-tourist's chronicle of California in the early 1850s: hunting, horse races, bear and bull fights, and an Englishman's bemused comments on social life in San Francisco, Stockton, and the gold fields". He had returned to England in 1853, married, and prepared to return with his new bride to California that same year. However, he had contracted yellow fever onboard ship, which forced him to cut the trip short and return to England where he died shortly before his book was published.

Discuss this Frank Marryat biography with the community: