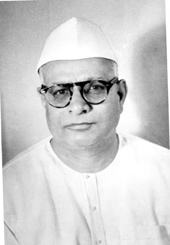 He was born at Berhampur in Orissa state on the auspicious day of Saraswathi Pooja. He did L.M.S. from Osmania University in 1927 and practiced for some time combining the traditional medicine with Yogic practices. He was the president of Indian Medical Association, Hyderabad branch for some time and established Patanjali Yoga Research Institute.

After Indian independence, he contributed significantly in the development of Hyderabad state as Member of Hyderabad Assembly between 1952 to 1956 and as finance minister. He was elected to the Indian Parliament three times between 1962 and 1977 and elected from the Hyderabad constituency.

His wife Vimalabai was also a well known freedom fighter. Vimalabai took part in the freedom struggle and after Independence was involved in social activities. She was the first chairman of Hyderabad State Social Welfare Advisory Board and also president of Karnataka Sahitya Mandira, Karnataka Mahila Mandal, and Melkote College. She died at the age of 92 on January 12, 2003.

Discuss this G. S. Melkote biography with the community: