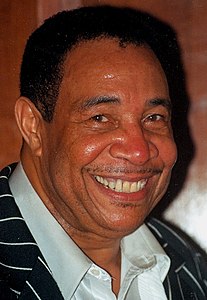 Who is Gene Chandler?

Gene Chandler also known as "The Duke of Earl" or simply "The Duke", is an American R&B and soul singer-songwriter, producer and record executive.

He is one of the leading exponents of the 1960s Chicago soul scene, best known for his million-selling hits "Duke Of Earl" and "Groovy Situation" and his association with the Dukays, the Impressions and Curtis Mayfield.

Gene is a Grammy Hall Of Fame inductee and a winner of both the National Association of Television and Radio Announcers' "Producer of the Year" Award and the Rhythm and Blues Foundation's Pioneer Award. Chandler is also one of a just a few select artists to chart hit records during the doo-wop, rhythm and blues, soul, and disco eras, with some 40 Pop and R&B chart hits between 1961 and 1986.

Discuss this Gene Chandler biography with the community: